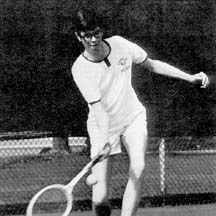 A tenacious competitor who matched a powerful serve with a relentless will to win, Michael L. O'Donnell ruled Catholic League tennis courts in the early 70's before taking his racquet to a four-year varsity stint at the University of Notre Dame. Standing 6'6", Mike intimidated opponents with a deadly serve-and-volley game. He was a hard-court version of Randy Johnson, wearing short pants and armed with a wooden-framed racquet. When his serve was on, he was virtually unstoppable, with his long reach, sound volley game, and exquisite control rendering the occasional attempt at a passing shot an exercise in futility. Mike earned four varsity letters between 1969 and 1972 on Loyola teams that won four straight Catholic League crowns while losing only once. He dominated league play in his senior campaign, going undefeated in both number one singles and number one doubles play while captaining the 1972 Ramblers (Hall of Fame, 2004) to an undefeated season and a Catholic League title. He was named the Lawless Award winner as the top tennis player in the Catholic League for 1972, and capped his career by winning the city singles title at the Chicago Catholic/Public League championship. Mike moved on to a highly successful collegiate career at Notre Dame, where he played four years, lettering as a varsity starter his final three. He competed at number two singles for three seasons, but his specialty was doubles. Playing at number one doubles, Mike compiled one of the finest doubles records in Notre Dame tennis history. His selection to the captaincy of the 1976 team punctuated a distinguished career. Mike earned a degree in English from Notre Dame, followed by a law degree from the University of Denver.
Back