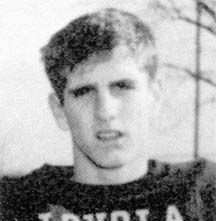 A record-setting quarterback and a superb defensive back, William T. O'Donnell, Jr. played a pivotal role on the storied Prep Bowl teams of 1965 and 1966. During Loyola's first Prep Bowl season of 1965, Bill was a fast-closing, hard-hitting junior safety starting alongside future All-Pro Tim Foley (Hall of Fame 1985). It was a team of star players, and Bill was a reliable member of the supporting cast. But with two regular season games remaining, he was thrust onto center stage when Foley, the starting quarterback, separated his shoulder on the opening kickoff. Enter the back-up quarterback - Bill O'Donnell. He seized the moment, leading the Ramblers to two impressive victories while going both ways. In the League semi-final game against Brother Rice, Bill went down with a broken collarbone, but not before he threw for the only touchdown of the game to secure the critical victory. His junior season had ended, but two weeks later, Loyola was City champion. The 1966 season saw Bill cap off his career with All-Star performances on both sides of the ball. On the defensive side, Bill's play at safety remained dependably brilliant. On the offensive side, Bill - ever the competitor - won a quarterback battle and began to rewrite the record books, setting seven new passing records. His poised, intelligent, gutsy play both running the offense and anchoring the defensive secondary provided the leadership necessary to propel a great team toward a repeat as Prep Bowl champions. At season's end, he was named to the All-Catholic League and All-Area teams. Upon graduation, Bill took his game to Brown University where as a wide receiver he led the freshman team in pass receptions, receiving yards, and total points. As a sophomore and junior, he twice lettered, leading Brown in minutes played. Elected co-captain and selected pre-season All-East prior to his senior season, Bill suffered a neck injury which required surgery, thus ending a fine career.
Back