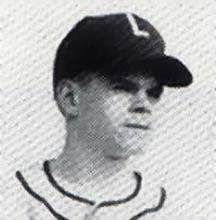 During his baseball career Jim O'Loughlin distinguished himself as a great pitcher and a great coach. After baseball was renewed at Loyola in 1958, Jim established its place and prominence. Whether no-hitting DePaul, averaging twelve strikeouts per game, throwing six shutouts in fourteen starts, or dueling Denny McLain of Mt. Carmel for the Catholic League Championship, it was this lefty in 1962 who set the standards. After being selected to the All-Catholic League team in both 1961 and 1962, Jim went on to St. Joseph College in Rensselaer, where he continued to ring up K's and shutouts. His senior year in 1966 was so dominating that he was chosen as the outstanding athlete for the year at St. Joseph and was a unanimous selection to the All-Indiana Collegiate Conference. The pro scouts were watching too, and Jim was drafted by the Atlanta Braves. Following graduation in 1966, Jim pitched in the Braves farm system for two years, reaching double A when an elbow injury took away his arm. He then brought his knowledge of the game, and especially the art and science of pitching, to Loyola as a coach from 1966-1974. In that time he developed the pitching staff and pitchers like Charlie Leibrandt (Loyola Hall of Fame) that brought Loyola its continuous run of championships from 1968-1974.
Back