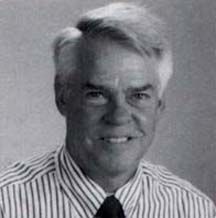 Respect is not handed to you. It is earned. In his thirty-seven years of coaching at Loyola, John A. O'Loughlin has earned the unreserved respect of his players, his fellow coaches, of any and all who were fortunate to come in contact with him and his teams. Quietly commanding, treating his players as men, without ridicule or abuse, John has always conducted himself with class and humility while leading the resurrection of two Loyola athletic programs Ñ baseball and basketball. John coached Loyola's 2000-2001 varsity basketball team to one of its greatest seasons ever, with the Ramblers posting a 23-6 mark climaxing in its second North Section title in three years, a Catholic League championship, and a State Regional crown. Loyola's 23 wins established a new Loyola record for most wins in a season. In his five years as the head of the program, John has rebuilt Loyola basketball from the ground up, suffering through two demoralizing seasons early on before constructing two title teams and ending a thirty-five year championship drought. John was named the Lawless Award winner as the Catholic League Coach of the Year in 1999 and the IHSA District 4 Coach of the Year in 2001. He had made Loyola basketball a winner again. It has ever been thus. John has been putting together winning teams at Loyola for thirty-seven years now. Following his graduation from the Academy, where he played varsity baseball and basketball from 1957 to 1959, and subsequent graduation from the University of Notre Dame, John returned to Loyola to begin his distinguished teaching and coaching career. In 1964 he took over as head varsity baseball coach and rapidly revived a moribund program, making the Ramblers perennial contenders. Over twenty-nine seasons, John coached his team to seven North Section championships and three Catholic League crowns (1973, 1990, 1992), and he earned five Lawless Awards as Catholic League Coach of the Year. From 1964 to 1996 before taking over as head varsity coach, John also served as head coach of the sophomore and freshman basketball teams. His squads posted an amazing overall record of 536-231 and captured three Catholic League championships, including back-to-back undefeated seasons in 1971 and 1972, and a 22-2 (14-0 in league) run in 1993-94. John's coaching peers recognized his steady brilliance with his induction into the Catholic League Hall of Fame in 1982 and the Loyola Academy Athletic Hall of Fame in 1990. His teaching peers did likewise, celebrating a marvelous career as Social Studies teacher and chairman with a long overdue Loyola Academy Educator of the Year Award in 1999. John brings to the coaching arenas the same traits he brings to the classroom: an unyielding integrity, a caring respect for student and athlete, a belief in the fundamentals, a calming sense of control, the dignity and grace of a man who knows himself and knows how to lead others to better themselves.
Back