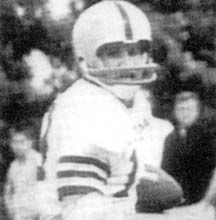 A brilliant player, leader, and student, Michael J. O'Rourke epitomized the best of Loyola football - determination to win, fairness, and strength of will and character - in establishing himself as one of the elite in Loyola's football history. Mike starred on the great teams of 1966, 1967, and 1968 as one of the very few (perhaps the only in the modern era) three-year, two-way starters in Academy football history. Tough, smart, and relent-less, he not only was a record-setting quarterback and a punishing defensive back, but also handled the kicking duties. He captained the 1968 North Section champions as both the offensive leader at quarterback and the defensive leader at cornerback. Mike was recognized as one of the best all-around players in the Chicago metropolitan area. After both the 1967 and 1968 seasons, he was named to the All-Catholic League, All-Area, and All-State teams. Remarkably, his selections to the All-Catholic League teams were for both offense and defense, a truly rare achievement. Mike ended his career with 2500 total yards, a record 40 touchdowns, and career records in every passing category. Equally impressive in the classroom, he was honored as a student-athlete in 1969 with the Skoglund Award, the Holy Cross Osmanski Award, the Armed Forced Leadership Award, and the Notre Dame Club of Chicago's Rockne Award. Upon graduation, Mike attended Harvard University, where his football career ended with a neck injury, and Oxford University. He followed with a law degree from the University of Virginia. Mike is a founding partner in his own law firm, O'Rourke, McCloskey and Moody.
Back