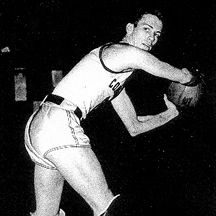 His was an era of shiny satin shorts and high-top sneakers, the age of the two handed set-shot, the driving lay-up, and the passing game. For the emerging cagers of the late 1930s, fundamental basketball was still king, and young men like Bob Gallagher took to it with eagerness. On the horizon, however, loomed world war, and their lives would never be the same. A scrappy, intensely competitive guard and long-range shooter, the late Robert E. Gallagher joined Loyola's lightweight basketball team as a sophomore after two seasons on the gridiron. After another season with the lightweights, Bob moved on to the heavies for his senior campaign in 1939-40, leading the Ramblers in scoring and earning a spot on the St. George All-Tournament team along the way. After leaving Loyola, Bob signed on to play basketball for the Big Red of Cornell University, where he captained the freshman team and led it in scoring. He started at guard on the varsity for the next two years, ending his junior season as the team's third-leading scorer and the captain-elect for 1943-44. However, the bombing of Pearl Harbor and America's entry into World War II early in his junior season altered the carefully laid plans of young men across the country. For Bob, the journey back to Cornell basketball would prove long and arduous. Upon entering the Navy, Bob was sent to Naval Aviation school at De Pauw University, where he played briefly for Hall of Fame legend Everett Case before continuing his naval training and basketball at the University of Wisconsin. In his first game for the defending national champions, Bob dropped two last minute bombs to sink DePauw and an irate Everett Case. Halfway through the season, the Navy sent him to the University of Iowa's Pre-Flight school. There he played alongside fellow guard Tex Winter before being shipped out to Corpus Christie Naval Air Station. In 1945, as the war was ending, he was sent to the fleet for duty as a carrier dive bomber. Following the Japanese surrender and his discharge from the Navy as a lieutenant, Bob finally returned to Cornell in 1946 for his senior year, captaining the Big Red to a runner-up finish in the Eastern Intercollegiate League before graduating in 1947. He was inducted into the Cornell Hall of Fame in 1998. Bob retired as president and CEO of Arthur J. Gallagher & Co in 1995.
Back