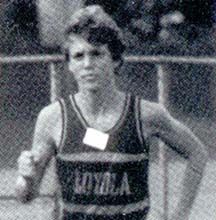 Thomas J. O'Rourke became Loyola's first All-State cross country runner since Loyola's entry into the IHSA, and his performances rank him among the finest distance runners in Academy history. A three-year varsity letter winner, Tom capped off a memorable junior season first by claiming the Catholic League individual title while leading Loyola to the team championship in 1984. He followed that triumph with a fourteenth place at the State championship meet, over the three-mile course, earning him a spot on the All-State team that season. Tom was a member of the victorious team at the 1984 Junior Olympics National championship, where he placed sixth. In 1985, the senior captain was again selected to the Catholic League All-Star team after his third place at the League meet. He repeated as a qualifier to the State meet where he finished just out of the running for selection to a second All-State team. He was twice selected Most Valuable. Tom also excelled on the track team, serving as captain in 1986. Among his accomplishments were a school indoor record of 8:55 in the 3000 meters, a tenth place in the 5000 meters at the Junior Olympics National championship, and a qualification for State in the 1600 meters. After Loyola, Tom continued his success at the University of Notre Dame, where he lettered three years in cross country and four years in track. He was a member of the All-Catholic National cross country team in 1988 and 1989 while leading the Irish to successive National Catholic championships and a ninth place in the 1988 NCAA. Though he flourished at all distances between 1000 and 5000 meters, Tom's specialty was the 3000-meter steeplechase, and he graduated with the ninth fastest time in Notre Dame history.
Back