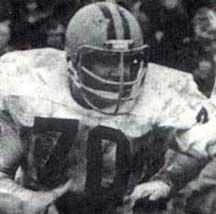 Mark Osman finished his career as one of the greatest linebackers in Loyola Academy history. Although Mark was an outstanding player at his offensive tackle position, his place in the annals of Loyola football rests on his sparkling play at inside linebacker. He was simply dominating as the leader of the defense, possessing great explosiveness and a fierce competitiveness. He anchored the defense on the 1975 Catholic League Champions and State Semi-finalists, one of Loyola's greatest teams. In a critical early season game against defending city champion St. Laurence, Mark had seventeen tackles, including one at the goal line to preserve the shut out. Mark led the team in tackles as Loyola drove toward the post season. Mark's brilliant play did not go unrecognized. He was named to the All-Catholic League, All-State, New World All-American and Scholastic Prep "Top 100" All-American teams for his performance on the gridiron that year. Mark received a football scholarship to Purdue University. As a freshman, he played at inside linebacker in several games, and was slated to be a starter for his sophomore season. However, an injury at the start of practice ended his season, and ultimately, his career.
Back