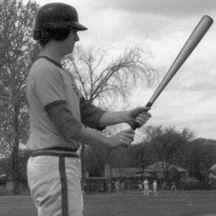 As Loyola's version of the legendary Ted Williams, sweet-swinging outfielder Michael J. Ouska acquired a reputation in the mid-70s as the toughest out in Catholic League baseball. A pure-hitting, left-handed batter, Mike possessed the rare ability to hit southpaws as well as righties, much to the frustration of opposing hurlers and managers whose duty it was to stop him. Armed with a complete command of the strike zone, he intimidated not with power but with relentless precision at the plate. He hit the ball where it was pitched, spraying singles, doubles, and triples to all fields with methodical ease. A quiet and humble leader, he let his bat do the talking, and talk it did. After a solid sophomore season on the varsity, Mike exploded in the spring of his junior year, taking the Catholic League batting title with a heroic.490 average and earning an All-Catholic League selection as well as a team Most Valuable honor. The Rambler captain backed that wonder season with another sparkling campaign in his senior year of 1976, posting a .372 average on his way to a second straight All-Catholic League selection and another Most Valuable award to add to his collection. His selection to the All-Area and Illinois Coaches' Association All-Star teams capped a brilliant prep career. Upon graduation from the Academy, Mike took his bat to Northwestern University, where his magic at the plate continued unabated. A four-year starter for the Wildcats, he registered a .326 career batting average and two time designation as the team's Most Valuable Hitter. Moreover, his .958 fielding percentage attests to his prowess on defense. No slouch in the classroom, he was selected in 1980 to the Big Ten All-Academic First Team. Mike earned a bachelor's degree in economics from Northwestern, and a master's degree in finance from the University of Chicago.
Back