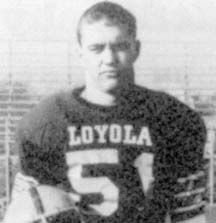 An integral part of the 1965 and 1966 City champions, Daniel R. Paschen was the consummate team player. Savvy, tenacious, and responsive to great challenges, he was an anchoring presence on two of the storied teams in Loyola football history. After starting at linebacker as a junior for the 1965 Prep Bowl champions and leading the team in tackles, Dan proved his versatility in 1966 as a two-way player, excelling at both guard and linebacker. Not one to dominate a game physically, he nonetheless controlled the game through intelligence, guile, speed, and determination. Dan succeeded by capitalizing on his strengths despite being on the small side for an inside player. He was quick off the ball and played mistake-free. As a guard he knew the blocking assignments of his fellow linemen and with them built an extremely cohesive unit. As a linebacker, he had a nose for the football, and was the exemplar for the small, yet quick, swarming defensive eleven working in a scheme that took advantage of their ability to play smart team football. The senior tri-captain was a coach on the field, a keystone on both sides of the ball for a team rushing to its second straight Prep Bowl championship. His solid, poised play did not go unnoticed: a Second Team All-Area selection in 1965 was followed by First Team All-Area, All-Catholic League, Tribune Golden Helmet, and Honorable Mention All-State selection in 1966. After graduation from Loyola, Dan earned a B.A. from the University of Notre Dame, and an M.A. from Northeastern University. For thirty years he has been a member of the mathematics faculty at New Trier, where he has also coached varsity football, wrestling, baseball, and softball.
Back