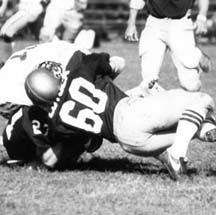 Daniel J. Galante's inspired response to the challenge of high school and college football is storybook material. At just 5'-8" and 185 pounds, Dan was a study in the "intangibles" Ð commitment, discipline, courage, and love-of-the-game. He was the ultimate team player, a coach's dream. He cut his teeth as first Loyola's, then Lawrence University's, defensive stalwart on the way to local and national acclaim. Quick, strong, smart, and unrelenting, Dan fronted the Ramblers' defensive line for two seasons, eventuating in his senior-year selections as captain, First Team All-Catholic League, and Skoglund Award winner. As a four-year starter at Lawrence, he anchored a 1985 nationally-ranked defense and, one year later, led Lawrence to a conference championship. Of personal bent were Dan's recognition as a four-time First Team All-Conference (the second player in Lawrence football to bag such honor) and a four-time All-American (the only player in the school's history to earn that distinction). Along with consecutive Pizza Hut and Associated Press First Team selections (1985, 86) and a three-peat MVP reckoning (1984-86) came Academic All-American honors and the distinguished Harmon Rice Award as the nation's outstanding athlete in the Phi Delta Theta Fraternity. As witness to his impact on its football legacy, Lawrence inducted Dan into its Hall of Fame in 1998. His playing days behind him, Dan launched what is now a fourteen-year coaching career. With stops at New Trier (varsity assistant, 1987), Northwestern University (graduate assistant, 1988-89), and North Park University (defensive coordinator and associate head coach, 1990-2000), Dan is currently the head coach at St. Patrick High School where, in his first year (2001), he guided the Shamrocks to a 7-5 record, the school's first post-season birth since 1996, and its first playoff win since 1987.
Back