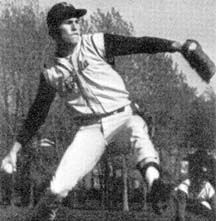 One of the premier two-sport athletes in Loyola's modern history, Edwin G. "Buzz" Frank shone with particular brilliance on the pitching mound. A three-time varsity baseball letter-winner (1969-1971), Buzz parlayed a three-pitch repertoire biting curve ball, tailing fast ball, and deft change-up into Catholic League All-Star credentials. His pin-point control and competitive nature translated into nine games, three shutouts, a strikeout-to-walk ratio of five-to-one, and, in his senior year, a miniscule 1.83 ERA and a 6-2 record (against the team's 8-9 ledger). In recognition of his sparkling play, he was selected to the Catholic League All-Star team in 1971. Buzz also excelled on the basketball court, earning two varsity letters. Team captain and defensive stalwart, he was named a Chicago Catholic League and Chicagoland Prep All-Star at the completion of his senior year. Upon graduation in 1971, Buzz, a State Scholar, accepted the Illinois General Assembly scholarship to the University of Illinois. Always in peak condition, he later joined the Chicago Griffins' Rugby Football Club (1975-1985) and competed in both the Chicago and Boston marathons until hip replacements in 1992 and 1993 tempered his appetite.
Back