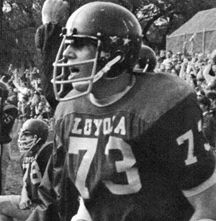 An indispensible workhorse during arguably the greatest back-to-back seasons in Rambler gridiron history, Paul J. Pauluzzi anchored Loyola's interior line play on both sides of the line of scrimmage, helping to lead the 1969 and 1970 teams to nineteen victories against a single defeat. Lining up at his tackle position, he brought to the field of battle a unique blend of size, speed, and athleticism, a combination that posed difficult match-ups for opposing offenses and defenses alike. An imposing figure blessed with an explosive first-step and tremendous mobility, Paul proved a dominating blocker on offense and a disruptive force on defense. He coupled quickness, agility, and raw power with a keen field intelligence and an instinct for the game, making him a vital element in a Loyola system that emphasized flow and movement over pure power. A mainstay at tackle while also doing kicking duty on special teams, he played nearly every down for two memorable seasons. On offense, Paul led the way for an impressive ground game, a punishing blocker opening holes for a dazzling group of running backs. During the historic run of the undefeated 1969 team, Paul's play proved instrumental to the two big victories over then national number-one Mendel. In the first game, he threw the key block on a 78-yard touchdown run that sealed the upset, and, in the rematch with the CCL title hanging in the balance, he delivered the key block on a punt return for the lone score of the game to send the Ramblers on to the Prep Bowl and a place in Loyola football lore. On defense, he wreaked havoc on the best laid plans of opposing offenses, recording 154 tackles, causing seven fumbles and recovering four, and notching thirteen quarterback sacks over two seasons. He helped the 1969 and 1970 defenses hold the opposition to a meager ninety-two total points in twenty games (4.6 per game) while posting an astonishing ten shutouts. On two teams laden with talent and rich in glossy resumes, Paul shone in the trenches, skilled in the art of grunt work on which such teams depend. His work did not go unnoticed. Paul ended his prep career as one of the premier lineman in the state, confirming his status with his selection to the All-Catholic, All-Area, and All-State teams of 1970. Paul attended the University of Iowa on a full football scholarship. He started at guard for the freshman team before devoting his remaining years to the Hawkeye rugby team, serving as team captain for two seasons. After college he enjoyed a successful fourteen-year international rugby career with the Chicago Lions and several National Select Sides, culminating in his selection as an alternate to the U.S. National Side, the USA Eagles.
Back