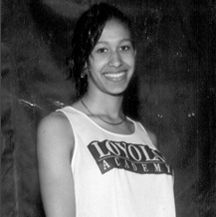 Tall, lean, long-striding Miriam T. Seul Hillsman was born to be a quarter-miler. Combining raw speed with power, rhythm, and a quiet determination, she conquered the intense physical and mental demands of the long sprint to become its champion. In the process, she gave credibility to Loyola's nascent women's track and field program, captaining a young, uncertain team to an historic first conference title and the beginning of a GCAC dynasty. After qualifying for the state finals in the 200-meter dash as a junior, Mia was ready to move up to the 400-meters. In her senior season of 1996, Mia took her Loyola track career to a fitting conclusion in the final three weeks of the season when performance matters most. After a superb indoor and outdoor campaign, she led her Ramblers to a team showdown with archrival Mother McAuley, long the dominant power in GCAC track in the years prior to co-education at Loyola. Mia was spectacular, taking the long jump by a full six inches with a leap of 16'1" before blowing away the field in the 400-meter dash with a time of 60.5 seconds, blasting her rivals by a full two seconds. The meet remained close with a single event remaining the 1600-meter relay. Mia's anchor leg of 61 seconds slammed the door for good as the Ramblers brought home the gold and Loyola's first GCAC crown by ten points over McAuley. In the following week at the state sectional, Mia claimed Loyola's first ever IHSA gold with a resounding victory in the 400. In addition, she anchored the 1600-meter relay team to a second place and a trip to the state meet in Charleston. In her final competition, she ran an impressive 60.22 in blazing heat, finishing 14th in the state 400-meter finals. Her young 1600-meter relay team finished 18th, disappointed but better prepared for days ahead. At the team banquet, Mia was awarded her second Most Valuable award, as much a testimony to her leadership and her young teammates' respect as it was to her glittering performances. Mia attended Northeastern University in Boston on a swimming scholarship. She dominated the American East Conference sprints, taking titles in the 50-yard freestyle three times (1997, 1998, 2000) and the 100-yard freestyle twice (1999, 2000). A three-time All-Conference selection (1997, 1999, 2000) and two-time team MVP (1999, 2000), she was holder of five school records by the end of her senior year. In 2000, she was named Best Senior Athlete as she led the Huskies to the conference championship. Mia graduated magna cum laude from Northeastern University, earning a degree in criminal justice. Thereafter, she worked for two years in the criminal justice system and almost five years in the pharmaceutical industry.
Back