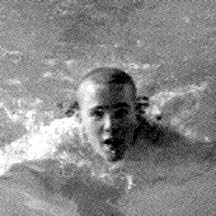 One of Loyola's greatest breaststrokers, Mike Poland set standards of excellence in swimming for all those who followed him. Mike's record of achievement is impressive. During his swimming career at Loyola Academy, Mike's performances in the 100-yard breaststroke earned him All-American recognition twice. A dedicated athlete with a tremendous work ethic, he was ranked among the top twenty swimmers in the nation during his junior and senior years. Competing against forty schools at the National Catholic Swimming and Diving Championships at Villanova University in 1965, Mike set a new meet record in the 100-yard breaststroke. He also took the Chicago Catholic League title in the same event, establishing a new school record. In addition to swimming, Mike participated on the golf team for four years, captaining the team in his senior year. After graduation, Mike moved on to an outstanding swimming career at the University of Southern California, where he was a key contributor in both the individual breaststroke and relay events. He swam on the 1966-67 NCAA Championship teams, earning All-American honors for his breaststroke leg on the 400-yard medley relay team.
Back