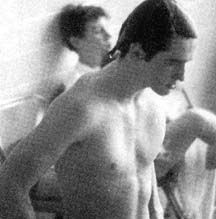 Todd T. Ford was one of the finest freestyle swimmers in Loyola Academy history. Bringing a unique combination of speed and endurance to the pool, he was a superior performer at both the sprint and the distance events. Todd's record of accomplishment is truly remarkable. In his three varsity seasons, he distinguished himself over all four freestyle distances, rewriting the record books of Loyola and the Chicago Catholic League in the process. He established new Loyola marks in the 50, 100, 500, and 1000 yard freestyle, and new Catholic League marks in the 50 and the 100. He took individual Catholic League titles in 1971 and 1972, and then added in 1972 the national title in the 50 yard freestyle at the National Catholic meet held at Villinova. His brilliant versatility in the pool garnered him numerous post-season honors. Chief among these were his selections to the All-Catholic League, All-State, and All-American teams for three consecutive years between 1970 and 1972. A tri-captain of the team as a senior, he was awarded the Fr. John P. Beall, S.J. Most Valuable Swimmer Award at the close of his high school career. A four-year swimming scholarship took Todd to the University of Miami (Florida). There he launched a highly successful collegiate career, as witnessed by his selection to the All-American teams of 1973 and 1974.
Back