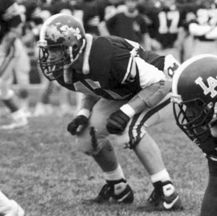 He spent the first twelve years of his life in Youngstown, Pennsylvania in the heart of hard-nosed football country. In Chicago he found a second home, one in which he embraced the tradition of blue-collar, physical football so definitive of Loyola and the Chicago Catholic League. If he had not found football, Jason Pompeii would have made a good boxer. At 6'0, 205 he was an intense young man with a short fuse. The game was his fight, and from his inside linebacker position, he burned with a smoldering intensity. He used his big, thick hands as a tool and a weapon, shedding blockers while punishing them in the process. He was difficult to block, and he made certain one paid a price for the attempt. Strong and mobile, he moved from sideline to sideline delivering body blows and making plays. As captain of one of the toughest defenses in the state, Jason was the ring leader, whose selfless and relentless play helped to hold the defense together. He played to win, but he also played for respect and demanded it from his opponents. and he played that style with pride. A two-year starter at inside backer, Jason first distinguished himself as a junior for the 1986 Prep Bowl champions and then as a senior for the 1987 IHSA state quarterfinalists. In his final campaign he became a dominating force in the league, leading the Ramblers to the Elite Eight with 152 tackles on a defense that yielded a stingy 8.7 points per game. At season's end he was honored with selection to the All-Catholic League and Pioneer Press All-Area teams. Jason took his game to Brown University, where he played football for two years before moving on to the rugby team. Jason pursued a double major in economics and political science at Brown, earning his Bachelor of Arts degree in 1992. He added an MBA in finance and economics from New York University Stern School of Business in 2002.
Back