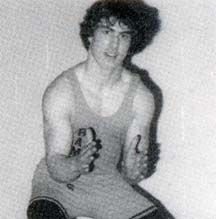 Paul J. Powers capped off a fine career on the mats with a senior campaign that remains one of the most dominating in Loyola wrestling history. With three solid seasons behind him, Paul made the '78 season truly memorable. The senior co-captain compiled an amazing single-season record of 31 wins and only one loss. It was his performances in the big meets at season's end, however, that were most impressive. Wrestling in the 185-pound class, Paul claimed three big titles in succession. First, he took the Chicago Catholic League championship. Using the League championship as a momentum builder, Paul won the IHSA District championship and advanced to the Sectional championship, where once again, he emerged victorious. This allowed Paul to be the first Rambler, along with teammate Fred Battaglia, to qualify for State in wrestling. Although he did not place at State, his achievements his senior year were remarkable and record-breaking. Wrestling is an individual sport, but Paul's goal was also to make the team better. As team co-captain and team MVP, Paul led Loyola to one of its best wrestling finishes ever. The Rambler grapplers finished second in the Catholic League, fifth in the Districts, and ninth out of thirty-one teams in the Sectional meet. Paul Powers was a major force behind the Ramblers' success on the mat in 1978. Paul's athletic prowess was not limited to the mats. He co-captained the varsity football team during his senior year. He was named Most Valuable defensive lineman and made the Catholic League All-Star first team. Paul was a part of the first defeat of New Trier East and two memorable defeats of Brother Rice, one in the regular season and the second in the playoffs which led to "The Snow Bowl" against St. Rita, where the Ramblers gave their all but lost 14-0. After Loyola, Paul attended Brown University, earning a degree in history.
Back