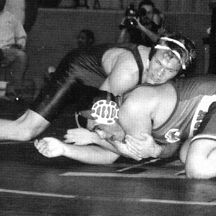 Within minutes of walking into the wrestling room for his opening practice as a freshman, Christopher K. Schultz knew he had found a home. Completely new to the sport when he joined up that day, he soon made it his sporting passion. He dedicated himself to becoming a competitor who would be remembered. Fortunately, wrestling came naturally to him. From those opening_practices, he soon recognized that his skill set was ideally suited to this most ancient of athletic disciplines. Blessed with superior strength, quickness, and balance, he drew the nickname "the Animal" from the upperclassmen. Realizing he needed more than brute athleticism to become the best, he trained diligently on his technique and the acquisition and mastery of a few key foundational moves. His signature move was the ankle pick, and even when opponents knew it was coming, it proved unstoppable. However, Chris's chief virtue had little to do with technique or power or speed. His unwavering dedication to his craft, his unstinting commitment to excellence, his disciplined approach to work these are the qualities that made him a champion. A champion he was. After a fine junior season in which he notched 30 wins, a third place in the Catholic League, a spot on the regional finals, and a fourth place in the sectional, Chris was ready for a big final campaign on the mats. He did not disappoint. Wrestling at 189 pounds, he reeled off a 37-5 record as he grappled his way to three major titles Chicago Catholic League, Regional, and Sectional all against top-rank opponents. The four-time MVP capped his career with a brilliant journey to the IHSA State quarterfinals, a fitting end to an accomplished career. After Loyola, Chris attended the University of Iowa, where he earned a B.S. degree in civil engineering.
Back