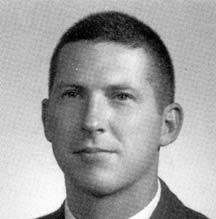 Thomas E. Powers is to coaching what rainfall is to the landscape: everyone grows from the experience. In his thirty-two years on the sidelines, he left a legacy of success wrought by dedication, discipline, industry, and integrity. Tom's coaching career began at the University of Notre Dame with his appointment as personal assistant to Frank Leahy and as varsity assistant to Terry Brennan in 1954. Upon graduation in 1955, he was named the first head football coach at the newly opened Notre Dame High School in Niles. Thereafter, he joined the staff of the legendary Max Burnell at St. George High School (1957-1962). In 1964 he migrated to Loyola, and his nine years as assistant coach and three as head coach were nothing short of brilliant. Innovative and demanding, he helped mold some of Loyola's greatest teams. As head coach of the Ramblers from 1973-1975, he took Loyola to the first IHSA Final Four in its history. Next stop was Evanston Township High School where Tom served as head coach from 1980-1987, building another North Shore powerhouse. Tom's impressive numbers bespeak a coaching giant. Injecting success at every juncture, he helped construct 186-63-8 record, four Chicago Catholic League championships, three Chicago Prep Bowl championships, two Central Suburban League South championships, three IHSA quarterfinals, and one IHSA semifinal. Personal accolades include the Chicago Catholic League Coach of the Year Lawless Award (1974), Chicago Prep Writers' Coach of the Year (1975), Notre Dame Club of Chicago Coach of the Year (1987), and the Illinois High School Football Coaches' Hall of Fame (1994).
Back