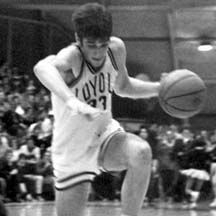 Flanked by current Hall-of-Famers Mike Cenar (1985) and Tom Tonelli (1998), Joseph P. Flanagan emerged from the 21-6 team of 1982 as the template to persistence, devotion to duty, and coachability. Grounded in fundamentals and tenacity, he honed his game on selective shooting and position rebounding. Not surprisingly, as Joe's game progressed, so, too, did his team's credibility. On the way to being a four-year honor student and senior-class president, Joe carved an impressive niche in Loyola cage yore. After an impressive junior year in which he posted an 8.8 scoring average against five rebounds per game, his final campaign (1981-82) proved rock solid. As captain and centerpiece, he upped his p.p.g. to twelve and finished the season as his team's second leading rebounder. Indeed, his steady hand influenced that year's Niles West Thanksgiving Tournament championship. No less, it was Joe's leadership facility that stoked the team's 21-6 record. His importance as the integral centerpiece of a high-powered team did not go unnoticed as he was twice selected to the All-Area team. Pursuing his degree at Northwestern and still hopeful of playing Division I basketball, Joe walked on his freshman year and by his junior season was seeing significant action. He was rewarded with a full athletic scholarship his senior year, during which he played convincingly off the bench. His career-high eight points, six rebounds, and four assists (Wisconsin, 1985) bespeak his trademark efficiency. A four-year Wildcat letter winner majoring in political science, Joe consummated his playing days with a selection to the Academic All-Big Ten team.
Back