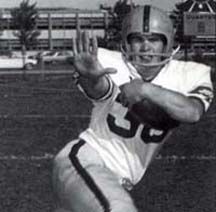 Paul "Buddy" Prikos, who played a pivotal role on Loyola's first Prep Bowl championship team, ranks among the finest two-way backs in Loyola's history. His performances that season, particularly in the Catholic League Championship and Prep Bowl games, were critical to the Ramblers' great success. He was at his best under the pressure of the big games. With Hall of Famer Tim Foley out of action in the last five games with a collarbone injury, Paul provided the senior leadership necessary to keep the team on course. In the Catholic League showdown with Leo, he ran for 93 yards on 14 carries. His sixty-yard touchdown run from scrimmage put the Ramblers in front early. Later in the game, just as Leo was mounting a comeback, Buddy intercepted a pass and went 71 yards for his second touchdown. In the Prep Bowl against Chicago Vocational, he ran for 150 yards with two touchdowns and two interceptions. He played both ways the entire game. At the season's end, Paul was awarded the prestigious Skoglund Award. Paul played two years of football at Princeton, where he earned an engineering degree. He earned his MBA from the University of Chicago.
Back