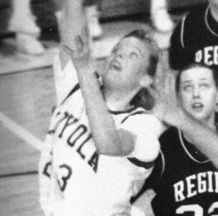 Loyola's storybook journey to consecutive state basketball titles in the mid-1990s has been well-documented, with the big games thoroughly dissected and the big stars properly applauded. The road to glory, however, was paved by a few remarkable players who prepared the way but who would not be there to share in the ultimate prize. One such player was Elizabeth M. Schillen. An unselfish, tenacious competitor, Beth anchored play inside the paint while leading the young, deep, and talented 1995-96 Loyola squad to GCAC and sectional titles. She was the ultimate team player, whose unstinting work ethic and unrelenting determination schooled her younger teammates in the demands of championship play. A multidimensional post player who dictated play at both ends of the court, Beth possessed few, if any, weaknesses. With tremendous hands and a lightning quick drop-step, she scored at will with a variety of post moves, including her trademark hook shot. Though she left Loyola as its all-time scoring leader with over 1,500 career points, Beth took greater pride in her exceptional ability to get the ball to the open man. A fierce defender, Beth proved herself an intimidating force under the basket as a shut-down artist and prolific shot blocker and rebounder. Furthermore, in her most important role, the two-time captain served as mentor to the talented but young players around her, teaching them by word and deed how to play the game and how to do so with class and poise. Among numerous individual honors, Beth was a three-time selection (1994-96) to the All-GCAC team as well as a three-time selection to the Pioneer Press and Sun-Times All-Area teams. She was twice named a Chicago Tribune Top 50 player and was twice named the Sun-Times Athlete of the Week. She was chosen in successive years (1995, 1996) to the All-Tournament team of the prestigious Chicagoland Challenge. Finally, her selection in 1996 to the All-State teams of the Chicago Sun-Times and the Illinois Basketball Coaches' Association punctuated a glittering resume of accomplishment. Beth earned a B.S. in management from Miami University in 2000, and a doctor of law degree from John Marshall Law School in 2007.
Back