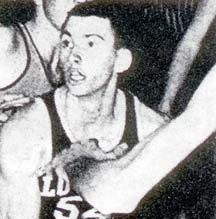 The decade of the '60s was one of the most storied in Loyola Academy's basketball history. It featured both championship teams and outstanding players. Daniel B. Quinn cut his teeth on both fronts. As a 6'3" junior center, Dan anchored the 1964 Catholic League champions. In 1965, despite being the only returning experienced player, he led the Ramblers to the DePaul University Holiday Tournament championship and walked off the floor as its Most Valuable Player. Dan's exceptional work-ethic endeared him to coaches and teammates alike. Assertive, relentless, and intimidating, he approached basketball with a "quiet resolution" - no fanfare, just assurances. He finished his senior year averaging a double-double in points and rebounds. He was subsequently named All-League, All-State, and New World Prep All-American. Heavily recruited, he opted to join his football-playing brother, Steve, at Notre Dame where, for his last two years with the Irish, he reunited with his former Loyola coach, Gene Sullivan. At the conclusion of his collegiate days, Dan was named to a Midwest College All-Star team that would hand the Russian Olympic team its only loss on a thirteen-game tour. That same Soviet team would later upset the United States' team in the 1972 Olympics. Dan graduated from Notre Dame with a degree in economics.
Back