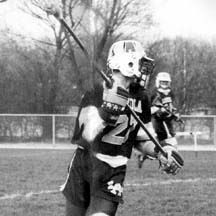 As one longtime observer noted, "Getting hit by Todd was like getting hit by a freight train." At 6'2", 210 pounds, All-American Todd N. Rassas physically dominated the defensive field of play. Possessed of tremendous speed, strength, and tenacity, he wreaked havoc on opposing offenses, first for the Ramblers of Loyola and then the Fighting Irish of Notre Dame. Along the way, he rose to the upper echelon of the American lacrosse world. A three-year starter, Todd was the defensive stalwart for Loyola teams that took one state title and finished state runner-up twice. He was physical and fast, a relentless terminator who excelled at converting to the offensive attack. An All-State selection in both 1992 and 1993, he closed his senior campaign and his career with selection to the All-American team and an invitation to the prestigious United States High School North-South game. At the collegiate level, Todd was even better, elevating his game while leading the defense for the University of Notre Dame, where he earned a trove of post-season honors. A three-time All-Star in the Great Western Lacrosse League, he was named its Player of the Year after his senior season of 1998. Most impressive, however, were his three straight selections to the All-American teams of the United States Collegiate Lacrosse Association. He remains one of only two Notre Dame players to be named All-American three times, and he and father Nick (Hall of Fame, 1985) remain the only father-son All-Americans in Notre Dame history. Perhaps the greatest honor in Todd's lacrosse career came in 2002, when as tri-captain of Team USA, he led the Americans to an undefeated record and a world championship in Perth, Australia. Upon earning his bachelor's degree in political science from Notre Dame in 1998, Todd entered the United States Secret Service. In 2001, Special Agent Rassas received its Medal of Valor for heroism while performing life-saving actions on 9/11.
Back