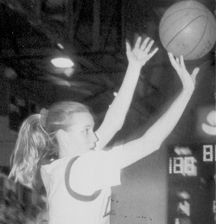 Her journey from three-point gunslinger to complete basketball player came to a glorious climax on the floor of Redbird Arena in the final game of a spectacular prep career. Although Kristin M. Santa had torched the Taylorville zone for 25 points, including a state-final record seven three-pointers, it was the rest of the box score that told the real story: nine rebounds, six assists, and four steals. This was not an aberration, but a confirmation. She was now a dominant player in every phase of the game. She now owned both ends of the court. She had become the measure by which future greatness would be judged. Armed with a quick-release, high-arcing jump shot, and a cold-blooded, steely-eyed, big-game demeanor, Kristin wreaked havoc on opposing defenses. Whether shooting over zones or from behind screens in the Ramblers' half-court offense, she rained down twos and threes from great range and with deadly accuracy. When she added the dribble-drive to her repertoire, Kristin posed a perplexing challenge to every effort to stop her. Excellent vision and a natural court sense made easier her evolution from pure scorer to a full-court presence. She became a deft passer in an offense with multiple weapons, but it was her growth at the defensive end that took her game to a different level. By that championship season, her devotion to defensive basketball revealed a tenacious ball-hawk whose anticipation and quickness allowed her to pillage the passing lanes and streak the court for easy lay-ups. The record of achievement is indeed staggering, highlighted by selections to the All-Conference (1995-95, 1995-96, 1996-97); All-Area (1995-95, 1995-96, 1996-97); All-State (1995-96, 1996-97); and All-American (1996-97, Honorable Mention) teams. Her performance in three Elite Eight games, in which she averaged 24 points per game, earned her a spot on the All-Tournament team and the MVP trophy. After a final season in which she averaged 18.6 points per game (still a school record), 4 assists, 3 steals, and 41% from the there-point range, Kristin was named one of the top 100 players in the nation by Women's Basketball News. Kristin took her game to Drake University, where she excelled both in the classroom and on the hardcourt. A two-time selection as Drake's Best Defensive Player (2000, 2001), a three-time selection to the MVC Scholar-Athlete team (1999, 2000, 2001), and a selection to the Verizon Academic All-America District team (2000-01), Kristen led three Drake teams (1997-98, 1999-2000, 2000-01) to MVC titles and NCAA Tournament berths, captaining the Bulldogs in her final campaign. In 2000-01, the senior was named to the All-Missouri Valley Conference (Honorable Mention) team, and in post-season play, her tournament record 12 three-pointers nailed down a spot on the All-MVC Tournament team. Final recognition came with her selection to the Drake University Athletic Honor Roll.
Back