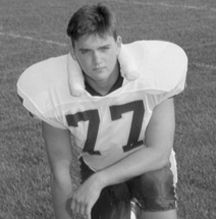 He was driven by fear. Not fear of his opponent. Not fear of the violence or pain inherent in the game. Rather, it was fear of letting down his teammates, his coaches, and himself. Liam F. "Bill" Reardon's inspired response to the challenge of high school and college football is storybook material. His is a tale of perseverance and possibility. Its plot is simple yet remarkable: choose a path, dedicate yourself wholly to following it despite the obstacles in your way, and push your way down it with relentless rigor. Lacking dominating physical skills, he was a study in the intangibles Ð commitment, discipline, relentless desire, loyalty to his teammates. He brought with him a heady mix of unrivalled technical soundness, a keen game intelligence, and an indefatigable drive to execute on every down. As the on-the-field leader of a very talented offensive line, Bill anchored play in the offensive trenches. A two-year starter at center, guard, and tackle, his knowledge of the game and his ability to read defenses and to make the necessary line calls made him the valuable linchpin to a team headed to a 12-1 record, a CCL North title, and the state semi-finals. Though honored with selection to the All-Chicago Catholic League First Team following the 1991 season, Bill was generally disregarded by college recruiters. Undeterred, he walked on at the University of Iowa and thereafter gave his career a Hollywood ending. He made an instant impact, serving as the backup center in 1993 while earning a full scholarship and the first of four varsity letters. He took over the long-snapping duties during his 1994 sophomore season, a job he never relinquished. In his senior campaign of 1996, the overlooked and unheralded center started every game for the Hawkeyes, including his third career bowl game. Although the smallest starting offensive lineman in the Big Ten, he was selected to both the Associated Press and the Coaches' All-Big Ten teams at season's end. He was awarded the University of Iowa's Coaches' Award as well as the Special Teams Award to close a memorable career. In addition to his football exploits, Bill proved himself a champion shot-putter on the track and field team at Loyola, consistently throwing in the 50-foot range. A three-year varsity letterman, Bill captured the Catholic League indoor shot put title in his senior year. After a close but disappointing second-place finish at the CCL outdoor meet, Bill brought his career to a fitting climax at the state meet with a personal best 53-foot throw and a top 12 finish.
Back