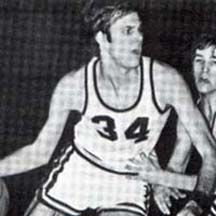 Jim Rebarchak distinguished himself at Loyola and Spring Hill College both in basketball and baseball, and his achievements in either, much less both, warrants his Hall of Fame status. At Loyola, Jim started four years on the varsity baseball team, compiling an over-all average of .343. His .372 mark in 1973 contributed mightily to that championship season. In addition, Jim still holds the single-game records for home runs (3 vs. Fenwick) and runs batted in (12 in the same game). As a basketball player, Jim was equally outstanding. He was a varsity starter for three years and capped off his career averaging 21 points and 10 rebounds per game. In both his junior and senior years, 1972 and 1973, he earned All-Catholic League honors. After Loyola, Jim went south to Spring Hill College where he not only played two sports, but started in both basketball and baseball all four years. In his senior year, 1977, he was selected Honorable Mention for both basketball and baseball on the NAIA All-American teams. Jim's remarkable two-sport performance at Spring Hill earned him a place in the Spring Hill College Athletic Hall of Fame. In addition to his athletic accomplishments, Jim was also nominated for a Rhodes Scholarship in 1977.
Back