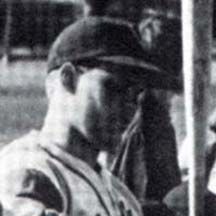 During his baseball years at Loyola and Lewis University, Steve Rebarchak epitomized the slugger. Steve was the first Loyola player (along with Andrew Spreitzer) to start on the varsity baseball team as a freshman. Like the legendary Babe Ruth, he started as a pitcher, but finished as a hitter - the long ball being his trademark. His 480-foot homerun at St. Laurence still stands as the longest. In his junior year, 1971, Steve hit .416 with a playing percentage of .651. He bettered both in his senior year, 1972, when he hit .420 and had a slugging percentage of .722. In both years he likewise led the Ramblers in runs batted in. His bat played a big role in the run the baseball team made for the Catholic League Championship in 1972. For his accomplishments Steve was selected to the All-Catholic League team in both 1971 and 1972, and in 1972 was runner-up as the Lawless Player of the Year in the Chicago Catholic League. From Loyola, Steve took his lumber to Lewis University where he helped Lewis to three NAIA Championships in 1973, 1975, and 1976. In his senior year, 1976, Steve led Lewis in hitting with a .392 average and was selected to both the All-Academic and All-American NAIA teams. In recognition of his outstanding four-year career, Steve was inducted into the Lewis University Hall of Fame in 1996.
Back