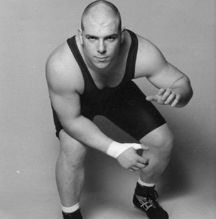 To be a truly great wrestler, one needs, among others, three attributes: the speed of a quarterhorse, the strength of a bear, and the mindset of a street fighter. Heavyweight Matthew M. Picchietti brought unusual quickness, exceptional strength, and a controlled aggression to his battles on the mat. However, what elevated him above most other heavyweights was his superior technique. He was a master of the take-down move and was a brilliant escape artist. Furthermore, in a weight class in which a good portion of a match is spent tied up on the feet battling for position, Matt's ability to throw opponents to their backs made other heavyweights very wary of tying up with him. Finally, he possessed to a greater degree than most the quality prized by champions the ability to endure pain. Matt's record of achievement is unquestioned: two Catholic League titles, three straight regional titles, and two qualifications to the state finals. He was a three-time Loyola MVP and in his senior year of 1997, captured the Lawless Award as the Most Valuable wrestler in the Catholic League. One of the last of a dying breed the three-sport athlete Matt excelled in both football and track. On the gridiron he earned an All-Catholic League spot in 1995 as a defensive lineman and was the Prep Bowl MVP of 1996. In track and field, he set the Loyola discus record and was a three-time qualifier to the state finals. Matt played football for a year at Iowa, earning a trip to the 1997 Sun Bowl. He transferred to St. Olaf College in Northfield, Minnesota to continue his wrestling and football careers while seeking a degree in English. At St. Olaf, a marvelous collegiate career led to two All-Conference berths, an MVP award, and an Academic All-American selection in his senior year. He was also named St. Olaf's football team's Rookie of the Year. Matt earned his Bachelor of Arts in English from St. Olaf's in 2001 and his Master of Education from Loyola University in 2009. His high school teaching career includes a six-year stint at Loyola, teaching English and heading the Academy's wrestling program.
Back