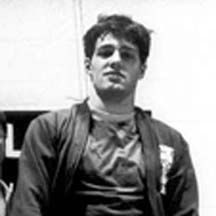 The poet reminds us that "the child is father to the man." The truth of this assertion is illustrated in the achievement of standout wrestler and coach Mark F. Rebora, who converted a brilliant high school and collegiate career into a distinguished coaching tenure still prominent today.

Lightning quick, intensely focused, and driven to succeed, Mark took to the mats in his sophomore year. That introduction blossomed into a precedent-setting career wherein, under the direction of Coach Fred Wright (Hall of Fame, 1999), he became the first wrestler in Loyola histo- ry to win thirty matches in a single season. In that same season, his senior campaign, he grappled his way to an individual Catholic League title in the 155-pound class, earning Most Valuable Wrestler and All-Catholic League designation in the process. He finished his prep career with over one hundred wins, a mark which firmly establishes his place in Rambler wrestling history.

Following the road of his mentor, Mark moved on to Cornell College in Iowa where he harvested a bevy of awards. A four- year letterman, he fashioned in his junior year the team’s Most Valuable Wrestler honors, its Paul K. Scott Outstanding Achievement award, and All-Conference selection. Senior year proved no less impressive, with Mark repeating as team Most Valuable and All-Conference, then capping his career with his selection as the Iowa Conference’s Outstanding Wrestler and his qualification to the NCAA tournament.

His physical education degree in tow, Mark returned to the Academy to teach health and take the reins as head wrestling coach from 1983-1992. Then, following a three-year stint as chair of Loyola’s physical education department, he bid farewell to his alma mater to serve in a similar capacity at Glenbrook North. Wrapped in 234 dual-meet wins, Mark stands as one of the state’s winningest coaches and, with twenty years of coaching experience (football and water polo, to boot), he continues to abide by his mantra that accomplishment is the residue of hard work.

In addition to his teaching and his coaching, Mark remains pro-active by conducting clinics in foldstyle, freestyle, and Greco- Roman wrestling. As one versed in prep, collegiate, national, and international competition, he bespeaks versatility, commitment, and purpose. Mark, wife Christine, and their two sons, Cole and Caid, reside in west suburban Glen Ellyn.
Back