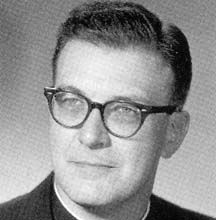 
Rev. John H. Reinke, S.J.'s ten years as President of Loyola Academy were marked by unprecedented growth in academic and athletic excellence, innovative curriculum development, and expanded spiritual and social programs. His decade of stewardship brought tremendous financial growth to the Academy, which in turn enabled Loyola to enhance its status as one of the preeminent private secondary schools in the country. Father Reinke's steady yet aggressive leadership was good for Loyola, and good for Loyola athletics. Fr. Reinke entered the Order after graduation from St. Xavier High School in Cincinnati in 1932. While still a graduate student at Loyola University pursuing his master's in Greek, he began his long association with the Academy as an instructor from 1939-1942. After teaching stints at Loyola University, Xavier University, and Indiana University, he returned to Loyola in 1959 as director of guidance and counseling. The following year, he was named headmaster (under his mentor, Fr. Michael I. English, S.J.), a position he held until 1965, when he was named president of the Academy. His presidency was looked upon with admiration by a large segment of those in secondary education. His leadership in generating voluntary financial support put Loyola tenth among all private secondary schools in the country and first among Catholic schools. He provided leadership for projects that many in his place would never have attempted. The RAMBLE, the Pace Program, the Long-Range Plan, and the Academy's Design Program, all received national recognition. In 1970, he promoted the addition of laymen of the Board of Trustees, and the election of Loyola's first lay Chair of the Board. Fr. Reinke left the Academy in 1975 to become the chancellor of Loyola University, where he served with great distinction for fifteen years.
Back