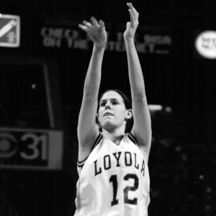 The indispensible leader of successive state championship teams, Jeanette M. Paukert Wehrenberg was the glue that held a team of young, highly talented players together as they chased titles and their place in Illinois basketball history. She was the consummate floor general, directing the Ramblers at both ends of the court with superior court intelligence and a fiery intensity. A rangy point-guard at 5'10", she came to the floor armed with a multifaceted game a shooter of great range and touch, a brilliant playmaker, a rebounder unrivaled at the guard position, a steady scorer from three-point range and under the basket at the end of a trademark slashing drive to the basket. Through it all, she was the charismatic, selfless scrapper who played for the love of the game, delivering to a team with high aspirations and tremendous pressure the perfect blend of heart, composure, and good humor that would keep it both focused and loose. A three-year starter and two-time captain, Jeanette made her varsity debut as a freshman moved up just in time to lead Loyola in scoring in the 1995 regional title game against Maine South. She never looked back. Thereafter, she played in 104 varsity games, in the process carving out an extraordinary record of individual and team accomplishment. A three- time GCAC All-Conference player, Jeanette capped her career with Sun Times All-Area, Pioneer Press All-Area, and IBCA All-State selections, as well as a spot on the 1998 state All-Tournament team. Shooting 53% from the field, she averaged 10.5 points a game in 1998 along with four assists, three rebounds, and three steals per game. She captained the 1997 and 1998 teams to IHSA titles, adding Loyola's co-MVP award after her final campaign. Jeanette took her game to Holy Cross, where she launched a sterling collegiate career. An All-Patriot League (2000-01) and three-time All-Tournament (2000-02) selection, she led the Crusaders to two Patriot League titles while making her mark in league and school record books. She scored over 1000 career points, averaging in double-digits during her last three seasons and just under ten points per game for her career. She graduated as Holy Cross' career leader in three- point field goals, and remains the Patriot League's single tournament record-holder with 12. Jeanette remains in the Holy Cross top ten lists in three-pointers (3rd-179), three-point percentage (5th-.373), steals (5th-216), assists (9th-414), free-throw percentage (9th), and games (10th). She was named Academic All-District and was a four-year member of the Holy Cross Academic Honor Roll. Jeanette graduated magna cum laude with a B.A. in mathematics and pre-med in 2002, and is a member of the Phi Beta Kappa society.
Back