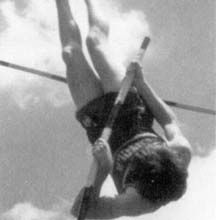 With his indoor and outdoor records still standing after nearly a quarter of a century, Timothy C. Reynolds remains the greatest pole vaulter in Loyola track and field history. Tim stumbled upon the pole vault during his sophomore season. By then he was establishing himself as a respectable long, triple, and high jumper until a memorable winter day of practice at the old McGaw Hall indoor track at Northwestern. After completing his workout, Tim sidled over to watch the pole vaulters finish their practice. Then the spirit moved him. Unbeknownst to the coaches, Tim slipped in line, grabbed an unused pole, and bounded down the runway. With no formal training whatsoever, he not only successfully planted the pole, he bent it as well, a skill usually requiring months or even years of trial and hard work. He was a natural, and he was hooked. By the end of the season he was vaulting 12' 6" while taking a second place at the Chicago league indoor meet and a third outdoors. He was up to 13' 0" by his junior year while still maintaining solid performances in his three other field events. It was in his final campaign that Tim began his assault on the Loyola record book. He captured both the indoor and outdoor Catholic League pole vault titles during a season in which he vaulted 13' 0" or better ten times. The senior captain and MVP led the Ramblers to the Catholic League title with his all-around field event prowess (he was a 6' 0" high jumper, a 20' long jumper, and a 40' triple jumper) before embarking on his journey to the state meet. A second place at the IHSA District meet took him to the State championship runway where the elite vaulters in Illinois were gathered. There he produced his greatest performance, breaking 14 feet for the first time to take 7th in the state and earn an All-State selection. His record-setting vault of 14' 3" brought with it another milestone as Tim became the first Rambler to score points at the State meet following the entry of the Catholic schools into the IHSA in 1974. Tim continued his track and field career at Georgetown University, where he competed in Division I as a pole vaulter and decathlete. After earning his law degree from the University of Notre Dame, Tim spent ten years as a state prosecutor until joining a family business, Family Video, a midwest video rental chain.
Back