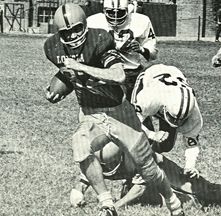 On any other team he would have been the golden boy, the featured running back bound for glory. As it was, James F. Rianoshek could not help but be overshadowed by two Loyola legendsÑRandy Marks (Hall of Fame, 1985), who set the school rushing record in 1966, and Jack Spellman (Hall of Fame, 1985), who promptly broke it in 1967. Nonetheless, Jim carved out his own space for glittering accomplishment, distinguishing himself as a big-play performer on offense and a stalwart in the defensive backfield for two of the renowned teams of the golden age of Loyola football. Blessed with good speed, agility, and strength, Jim possessed a natural athleticism that usually gave him a leg up in any sporting competition. As an indispensable two-way starter in both 1966 and 1967, Jim was one of the difference-makers on teams that produced a combined 17-3-1 record. A halfback armed with superior vision and a remarkable ability to break the big play, he was a dangerous man in the open field, whether busting through on a rush or hauling in a pass. Over the course of two seasons, he rushed for 662 yards in just 63 carries, averaging an astonishing 10.5 yards per carry (10.9 in 1966 and 10.1 in 1967). He scored nine touchdowns, both on the ground and through the air. On the defensive side, he was as good a cornerback as there was in the league defending both run and pass. Against the run, he was fearless in taking on blockers and ball-carriers alike. Against the pass, his athleticism and open-field instincts made life difficult for opposing quarterbacksÑwitness five interceptions despite their best efforts to throw away from him. Jim's superb play on both sides of the ball did not go unnoticed, as he was selected to the All-Catholic League and All-Area teams. At season's end, he was selected to receive the prestigious Skoglund Award, given annually to the outstanding senior student-athlete on the Rambler football team. Jim continued playing ball at the collegiate level, starting three seasons in the defensive backfield at Brown University. In his junior year he was named All-New England (Honorable Mention), and for four weeks led the nation in interceptions. Jim also played midfielder on Brown's top-ten lacrosse team. After completing his bachelor's degree from Brown in 1972, Jim entered graduate school at the University of Chicago, earning an M.A.T in education and an M.A. in English and American literature. A long and varied career as a schoolteacher, morning television host, restaurateur, and entrepreneur has led Jim to his present role as executive director of Attention Homes, serving at-risk teens in the Denver/Boulder area.
Back