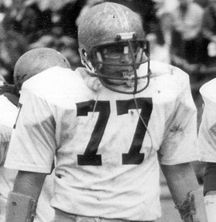 A driven, intense battler, Brian Faut was a warrior in the trenches, ruling Catholic League line play from his offensive tackle and defensive end positions. An imposing presence at 6'3," 240 pounds, he coupled impressive physical tools with a ruthless tenacity and iron will. Quick and powerful, Brian brought a relentless aggression to every snap of the ball. He played the game with an unrivalled passion, not only in the spotlight of game-day but also in the rigorous grind of daily practice. He took tremendous pride in his refusal to back down from any challenge. His coach called him a true "Catholic Leaguer," carrying an old-school, lunch bucket mentality to the field that inspired teammates and demoralized the opposition. A starter at defensive end as a junior, Brian started at offensive tackle as well the following year. He never left the field during his senior season, doing the grunt work as the indispensable anchor of Rambler line play on both sides of the ball. A string of dominating, hard-nosed performances did not go unnoticed by rival coaches, leading to an All-Catholic League selection and a spot on the CCL All-Star team in their annual match-up with the Chicago Public League All-Stars. Brian's reputation as a one of the Chicago area's top interior lineman earned him a scholarship to Ohio University. There, though often overmatched in size, he learned to beat his opponent with superior technique, intelligence, and quickness. After an initial red-shirt season, he became the mainstay in the Bobcat's interior offensive line, starting the next four years at center and guard. At the conclusion of his final season, he was honored with selection as Ohio University's Most Valuable Player and, thereafter, a subsequent nomination as the MAC Player of the Year. Upon receiving his business degree, Brian founded and developed with his father an import auto parts business, Midwest Underparts, in Chicago.
Back