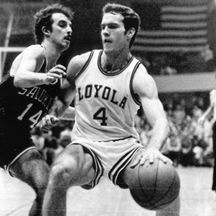 He cut his teeth as the sixth man on the 1975-76 Elite Eight team, memorably sinking two clutch free throws in the final seconds of the quarterfinals to push his Ramblers on to the Final Four. His ability to perform under the pressure of the spotlight would serve him well the following season when, as Loyola's go-to player, he would carry the load for the Rambler five. A complete player commanding respect at both ends of the floor, 6' 2" guard Thomas P. Riordan prospered through a potent mixture of court savvy, hustle, and sheer athletic talent. An offensive threat anywhere on the court, Tom extended opposing defenders with his long-range jumper, thereby exposing them to his masterful drives to the basket. His tremendous shooting range and his well-deserved reputation as a scorer sometimes obscured his brilliance as a ball handler and passer. Quick, disciplined, and intelligent, he commanded the offensive attack with consummate skill and precision whenever called to do so. His genius at the offensive end was matched by his commitment at the defensive end. Fundamental soundness and sheer tenacity marked Tom's approach to defensive basketball, and he took to its demands with enthusiasm. His pride in shutting down the opposition took the full measure of his competitive spirit, and inspired his teammates. As a junior coming off the bench for the 1975-76 state team, Tom proved a major contributor, chipping in 10 points per game on 50% field goal shooting. With Loyola suffering heavy graduation losses in 1976-77, Tom took the Ramblers' hard-court fortunes on his shoulders in a scintillating senior year, pumping in 18 points per game on 48% shooting to finish third in the Catholic League scoring race. At season's end, the Rambler captain and MVP claimed All-Catholic, All-Area, and All-State (Special Mention) honors to close a distinguished prep career. Thereafter, a scholarship brought him to Spring Hill College, where he started as a freshman (9 points per game) and led the team as a sophomore co-captain (14 points per game) before transferring to Loyola University. At Loyola, his mistake-free ball-handling and automatic shooting touch helped him battle for playing time at both guard positions. A solid addition to the NIT bound Ramblers in his junior year, Tom proved indispensable off the bench in his final campaign, garnering Loyola's Coaches' Award for his efforts. After earning first a bachelor's degree in political science and then a law degree from Loyola University, Tom began a career as a prosecutor in the State's Attorney's Office before entering the private sector.
Back