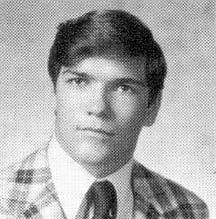 In a sport as unforgiving as wrestling, Thomas C. Robertson championed the invitation. Dedicated and driven, he brought nobility and purpose to perhaps the toughest of all weights, the 155-pound class. He coupled solid technique with strength, lightning quickness, and an uncompromising determination. His approach to the sport was simple and pure: never be outworked, never be intimidated, never quit. A grass-roots competitor, Tom sent a wake-up call to league and state rivals as early as his sophomore year when he compiled a near-flawless 19-1 record and MVP honors. Junior year saw Tom and teammates Mark Rebora (Hall of Fame, 2003), Paul Powers (Hall of Fame, 1999), and Fred Battaglia (Hall of Fame, 2001) stoke the 1978 grapplers to a second-place finish in the vaunted Chicago Catholic League. In his senior year, no less, Tom again captured MVP recognition Ð courtesy of a 35-12 record; the CCL 155-pound championship; a regional title; a second in districts; and a third in sectionals, where he distinguished himself as the first Loyola wrestler to win two downstate matches to qualify for the Final Sixteen. Unfortunately, a shoulder injury he sustained during his second tilt kept Tom from testing even deeper waters. Under the tutelage of Art Kraft at Triton Junior College, Tom met continued success at the next level. He emerged a two-time national junior-college qualifier on the heels of a third place finish in the Illinois championship in 1980 followed by a second place claim in 1981. His wrestling days over, Tom left the mats to pursue a degree in management from the University of Illinois at Chicago, which he earned in 1984.
Back