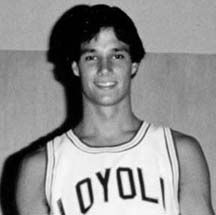 It was clear from the moment he walked onto the floor for his freshman tryout, that Dan Falotico would develop into one of Loyola's premier basketball players. His touch and spring were attributes his coaches recognized right away. In his senior year, Dan was named Player of the Year in the Catholic League. The Illinois Basketball Coaches Association named him to their All-State team and invited Dan to play in their annual North-South game. Dan went on to play basketball at DePauw University.
Back