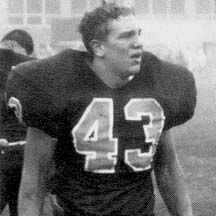 He was as great a player and person as has ever worn the maroon and gold. In eighteen years of a life cut tragically short, Jarett R. Romanski left an indelible impression on all who came to know him. A tremendous all-around football player who excelled at every facet of the game, Jarett impressed as much with his character and intelligence as he did with his remarkable athleticism. At 6'2" and 218, Jarett cut an imposing figure on the gridiron. Big, strong, and fast, Jarett was capable of dominating from every position on the field, offense or defense. His play at fullback revealed a gifted runner, a sure-handed receiver, and a punishing blocker. At outside linebacker, he proved a devastating weapon Ð hard-hitting, mobile, and menacing to the run or the pass. A junior starter at fullback, Jarett averaged 5.5 yards per carry and scored nine touchdowns to help lead a young Rambler team to a surprising 12-2 record and a state runner-up finish. Jarett's senior campaign was a study in selflessness and versatility. With his team loaded in the offensive backfield, Coach John Hoerster (Hall of Fame, 2004) made the pivotal decision to move Jarett to outside linebacker to help anchor his defense. Jarett accepted the challenge without hesitation, and thrived. However, a season-ending injury to tailback Adrian Autry in game six necessitated Jarett's return to fullback for the remainder of the season. In the next seven games, he rushed for 625 yards, averaging 5.1 yards per carry and scoring six touchdowns. The Ramblers went on a tear, winning eight straight on their way to their first state title. Unfortunately, a torn knee ligament suffered in the semi-final game against Libertyville sent Jarett to the sidelines for the title game. There, he inspired the team he had been so instrumental in leading to the pinnacle of Illinois football. At season's end, Jarett collected All-Catholic League and All-Area honors, as well as the prestigious Skoglund Award annually given to the top scholar-athlete on the Rambler football team. Ranked 30th in a class of 431, Jarett was awarded a full academic scholarship to Harvard University, where he looked forward to playing four years of Ivy League football. It was not to be. During a spring break trip with teammates and friends, a tragic accident took Jarett's Life. It was Jarett's character, finally, that in retrospect shines most brightly and remains his legacy -- his selflessness, his humility, his caring commitment to his teammates and friends, his enthusiastic embrace of life. Jarett's jersey, #43, was retired following his death and today hangs in the varsity football locker room at Loyola.
Back