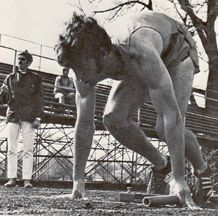 For James S. Fahrenbach, running track was always about the team first. In keeping faith with that belief, he followed the lead of his head coach and mentor, taking seriously the notion that competing was a privilege and not a right, and that the unspoken code of the team competitor necessitated the sacrifice of personal quests in order to achieve communal ends. He was a fine sprinter and hurdler and jumper true enough. He was very fast, won his share of races, broke a few records, and draped many a medal around his neck also true. But the measure of a man, a competitor, a Hall of Famer, cannot always be found in a mere recitation of statistics. Some athletes demand a different measuring stick, athletes like Jim Fahrenbach. Jim was a gifted athlete who coupled tremendous speed with an unrivalled passion for the sport. Most of all, he led by example. As a leader of the championship teams of 1970 and 1971, he was the consummate team man, refusing to become merely a specialist in pursuit of his own agenda. Team titles in track are customarily won by teams that demonstrate breadth over eighteen events as well as depth within a single event. Jim possessed a natural athleticism that allowed him to excel in multiple events, to help his team "cover": sprints and sprint relays, hurdles, jumps, even the discus. His was a gift of dependability in the clutch he could always be counted on to secure points in all four events in which he competed. His best event was the 180-yard low hurdles, in which he set the school record (20.7) as a senior. In addition to his sterling performances in the hurdle races, Jim scored big points for Loyola in the 220-yard dash and the physically demanding long jump. Fittingly, Jim gravitated to the relays, the ultimate team events in track and field. In the most significant meets, with titles on the line, Jim sought to maximize points for the team. He was committed to competing in four events even if it cost him a little portion of personal glory. If it would help the team, it was the necessary choice, and the only honorable choice. Jim captained the 1971 team to a repeat title in the CCL championship, ending his final campaign as the Ramblers' top point-scorer and Most Valuable selection. Upon graduation from Loyola, Jim headed to Marquette University, where he lettered in track while earning his degree in radiologic technology.
Back