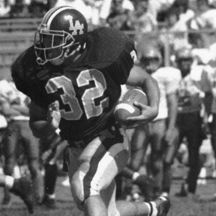 Possessing a combustible mix of power, speed, balance, and vision, Patrick J. Naughton wreaked havoc on opposing defenses en route to the greatest single-season rushing campaign in Rambler gridiron his- tory. In doing so, he rewrote the record book while staking his place alongside names like Marks, Spellman, and Pooler in the long maroon line of outstanding running backs. As a little-used junior back-up behind two strong seniors, Pat carried only 19 times for 105 yards during the 1994 season. The next season was a different story. Now the linchpin of Coach John Hoerster's run-dominated offensive scheme, Pat exploded onto the scene in the opener with 169 rushing yards, and the assault on the Loyola record book was underway. With explosive quickness and strength coupled with a tremendous ability to absorb a hit and turn churn out extra yards after contact, the 5'10," 205-pounder reeled off 2005 yards in 321 attempts, smashing the single-season record by nearly 600 yards. He averaged a remarkable 167 rushing yards per game over the course of thirteen contests, rambling for a gaudy six yards per carry. In addition to his rushing numbers, Pat led Loyola in receptions, receiving yards, and punt return average as well, producing 2,430 all-purpose yards for the season and n average of 187 total yards per game. He scored fifteen touchdowns and 104 of the Ramblers' 194 points while leading the 1995 Ramblers to a 10-3 record, a playoff berth, and a Prep Bowl Championship. His 170 yards in the Prep Bowl victory took him over the 2000-yard mark, pushing his career total to 2,142 yards and establishing the new career rushing record to go alongside his single-season mark. Pat was showered with multiple post-season honors: he was named All-Catholic League (First Team) and Pioneer Press All-Area (First Team), IHSA Coaches' All-State, and Chicago Tribune and Chicago Sun-Times All-State (Honorable Mention), and was selected to play in the North-South Suburban Sun-Times All-Star game and the East- West All-State game. After Loyola, Pat played one season at St. Joseph College in Rensselaer before leaving school to join the Marine Corps. He served from 1997 through 2005. He was a member of the Marine's Counter-Intelligence/Human Intelligence Division from 2001-2005, working in Europe and later in Iraq in support of the Marine Expeditionary Force intelligence operations. He was honorably discharged in 2005 with a rank of Sergeant.
Back