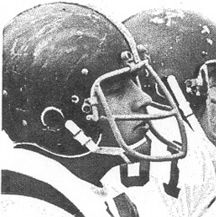 As a player, he had few rivals. As a leader, he had none. He was the All-American boy-- president of the senior class, Torch Club officer, captain of two teams, and Skoglund Award recipient. An All-Everything tackle, Michael A. Savone coupled power, speed, and agility with a selfless devotion to his teammates and to the game. From his tackle position, he physically dominated the line-of-scrimmage on both sides of the ball, whether punching holes at the point of attack or stuffing the middle as the leader of the defensive front. Four years as a top Catholic League wrestler helped refine the tremendous footwork and leverage he brought to bear on the opposition. Armed with textbook technique and a punishing aggressiveness, he dictated play in the trenches with overwhelming strength, quickness, and mobility. A two-year, two-way starter at tackle, the 1972 Rambler co-captain ended his senior campaign draped with honors, in particular for his work on the offense. Selections to the Chicago Tribune and Chicago Sun-Times All-Catholic League teams, the Chicago Today All-Area team, the Chicago Daily News All-Chicago team, and, finally, the Illinois All-State team recognized a master of his game. Among other honors, he was also named winner of the prestigious Catholic League Golden Helmet Award as well as of Loyola's Robert W. Skoglund Award, given annually to the top student-athlete on the Rambler football team. More important, though, than an armload of honors was the respect he had earned from his teammates and coaches for his leadership of the team, his unswerving loyalty to its cause, and his characteristic humility. Upon graduation from Loyola, Mike received appointments to both the United States Naval Academy and the United States Air Force Academy. He chose the Air Force, where he started at nose-guard and middle-linebacker as a freshman before transferring to St. Louis University. He earned a bachelor's degree in accounting from St. Louis, and later, a master's degree in project management from Denver Technical College.
Back