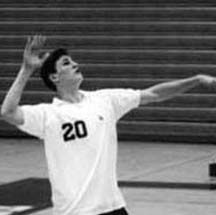 Matt Schabes was the captain and team leader of the 1993 Rambler volleyball team that posted a record of 33-1, losing only to the eventual State Champions. Matt was a Chicago Tribune first-team All-State selection and the Chicago Catholic League Player of the Year. In addition, he was a three-year varsity starter, the prestigious Downers Grove South Tournament Most Valuable Player, and led the team in many offensive and defensive categories.
Back