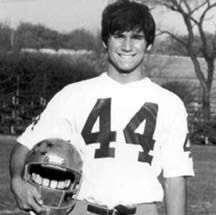 Football and Track and Field

Any conversation regarding the greatest all-around athletes in Loyola Academy lore must include the name of Robert C. Schwarze at the forefront if it is to be taken seriously. A burning intensity and tenacious will to succeed, coupled with an inherent athletic talent, drove him to superior levels of performance in two arenas Ð the gridiron and the track. One of the Catholic League's elite running backs and one of the state's most complete track and field competitors, Bob was Loyola's Jim Thorpe, the All-American boy, before the future would lead him to service on a different field of battle.
Back