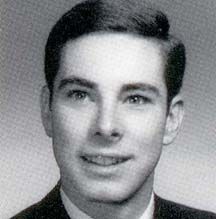 Mark S. Seeberg has been deeply involved in the athletic scene at Loyola since his freshman year in 1963. He left his most lasting impact, however, in 1985 when, as Loyola's director of development, he founded the Athletic Hall of Fame. Mark's first involvement with Loyola athletics came as manager of the football team. He served in that capacity all four years, heading the program during the Prep Bowl seasons of 1965 and 1966. He was Loyola's first student trainer and was the sports editor of the Prep his senior year. His stint as a two-minute half-miler on Frank Amato's track team ended abruptly his senior year when he contracted a blood disorder. From 1967-1971, Mark served as student trainer of the University of Notre Dame basketball team during the Austin Carr era. There he worked for three future Academy Hall of Famers: Johnny Dee, Gene Sullivan, and Buzzy O'Connor. He was awarded a Notre Dame monogram his senior year. After graduate school at Brown University, Mark returned to Loyola in 1972 as a member of the English faculty. He joined Bill Gleason's staff and for thirteen years coached the Flies, Bantams, and Loyola's first sophomore team. He also scouted extensively for the varsity. Additionally, he assisted Tom Monforti in the training room each fall and served as the athletic department's equipment supervisor for ten years. In 1982, he joined Jean Corby's development team, later succeeding her as director of development. In 1985, in connection with Loyola's 75th Anniversary, Mark initiated the idea of an Athletic Hall of Fame to help celebrate Loyola's proud history. He formed a committee to select criteria for induction and to establish a process for future induction. He spent countless hours researching and compiling data and writing bios on scores of past Loyola athletes. He organized the first induction ceremony held in Loyola's chapel in 1985, where 67 former greats were honored. Mark left Loyola in 1988 to serve as development director for the Archdiocese of Rochester, New York.
Back