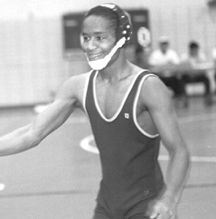 Resourceful, relentless, and uncompromising, Felipe R. Sosa dominated the wrestling mats of the Chicago Catholic League and the north suburbs as few Ramblers had before him, thereafter launching an outstanding career at the collegiate level. And he did it the hard way. As the first graduate of Loyola's Boys' Hope program to earn induction into the Athletic Hall of Fame, Felipe overcame tremendous obstacles to success in carving out a memorable athletic career. Armed with catlike quickness and agility, Felipe overwhelmed opponent after opponent en route to a record-setting four-year reign in the lightweight divisions. Few grapplers could match the impressive physical and mental package he brought to competition. Coupling superior speed and technique with a deeply ingrained competitive nature and an intense love of the game, he was always ready for battle, and he hated to lose. Above all, he loved his fellow wrestlers and was loved by them. Elected captain his senior year, Felipe embraced the team concept that meant so much to him, earning his teammates' trust with his leadership and his characteristic willingness to teach and to lend a hand. First at 103 pounds and later at 112 pounds, Felipe ruled Chicago-area competition, putting together a string of victories on the way to an astounding varsity total of 100 wins, the most in the history of Loyola wrestling. Competing in one of the toughest wrestling conferences in the nation, Felipe took second (103 lbs.) in the Catholic League in his junior year before finally claiming the CCL title (112 lbs.) as a senior in 1990. Hardened by the intense grind of week-to-week battle in the Catholic League, Felipe flourished in IHSA state competition, capturing three successive regional titles followed by three successive state finals berths between 1988 and 1990. Felipe took his game to the collegiate level at St. Olaf College in Northfield, Minnesota, where he enjoyed continued success. Wrestling at 118 pounds, he started on the varsity in his freshman and sophomore years, compiling a fine 50-20 record highlighted by qualification to the national championships in 1991 and 1992. He achieved a rare honor for an underclassmen when, only a sophomore, he was selected captain of St. Olaf's team. However, with his deepening involvement as a counselor in the Big Brother program occupying a more significant role in his life, Felipe decided to forgo the remainder of his collegiate eligibility and end his wrestling career.
Back