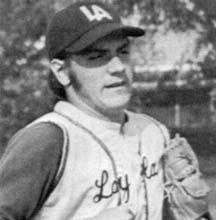 His competitive fire, killer instinct, and diamond savvy earmarked Andrew B. Spreitzer's Rambler varsity baseball career. His high-octane intensity, lightning-quick reflexes, and athletic edge distanced him from the pack. A rare four-year varsity player and a three-year starter at as many positions - center field, catcher, shortstop - Andy crafted a serious but fun-loving approach to the game that matured at Loyola and would peak at the collegiate level. A promising Lightweight basketball career died prematurely when, after a sterling junior year (1970-71) hinted of an MVP season to come, Andy lost his toughest game - the measuring-in at De La Salle. That setback, however, only steeled his determination to make baseball his crown jewel. Andy brought to the field a superb all-around game, marked by line-drive, clutch hitting in the Billy Williams mold and fielding of exceptional speed and range. Most importantly, because of his leadership, his team prospered. Showcasing what scouts had already acclaimed as an electrified bat, a gold glove, and a rifle arm, Andy piloted the Rambler nine to a Chicago Catholic League Runner-Up finish in 1972. His senior campaign culminated in his second consecutive All-Catholic League recognition and the Mike Heckinger Old Timers' Association Award. Accepting a scholarship to Northwestern, where he graduated from the prestigious Medill School of Journalism, Andy lettered as a four-year Big Ten shortstop. Of note is his season high NU record of 16 hit-by-pitched-balls in 1973, the year when as a freshman he also led the Wildcats with a .371 batting average and 14 home runs. A year later, Andy fashioned yet another club record - 16 assists in one game. Following his senior campaign, the Big Ten coaches recognized his four years of sterling fielding and batting with his selection to the 1976 All-Big Ten team. With professional baseball at his beckon, Andy agreed to a one-year deal with a Boston Red Sox affiliate in the Cape Cod League.
Back