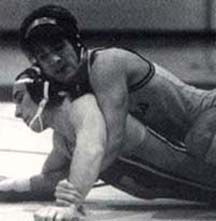 Pat Einarsen ranks among the best wrestlers ever at the Academy, and becomes the third wrestler honored by the Hall. Wrestling in the 105 pound weight division, Pat was known for his quickness and agility. Pound for pound he was one of the toughest competitors in the league. His senior year was truly outstanding. After a fine regular season, he captured the Catholic League title in impressive fashion, and was named to the All-Catholic League team. He then went on the the State series where he was a finalist at both the District and the Sectional. He finished seventh at the State meet, and was honored with a selection to the All-State team. In later competition, Pat was a Junior Olympic State Champion, and was selected to the All-Midwest National Team. After graduation from Loyola, Pat Continued wrestling at Loras College where he lettered all four years. He qualified twice for the Nationals and was a two-time selection to the All Conference Team. While still just a sophomore, he wrestled in the 1984 Los Angeles Olympic Trials and in 1985 he was the Prairie State Champion of Illinois.
Back