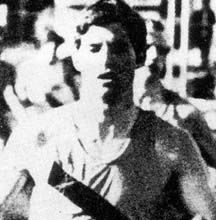 In the glamorous, ego-driven world of sprinting, Todd A. Steffens was a rarity: a gritty, hard-nosed workhorse who never saw a race he didn't like. His performance in the 1969 Catholic League meet alone is worthy of Hall of Fame status. He was one of the most consistent and competitive athletes ever to put spikes to cinders for Loyola. After a solid sophomore year in which he took a third in the Junior Catholic League championship meet, Todd began his varsity career in earnest. He led Loyola in scoring with 93 points while running a broad range of individual events from the 100 yard dash to the half-mile and anchoring the relay teams. He was named to the Catholic League North Section team after winning the 440 yard dash and placing second and fourth in the 200 and 100 respectively. At the league championship meet, he took third in the 440, fifth in the 100, and second in the mile relay. In his senior year, Todd continued to carry the load as captain of the 1969 team. He was again named to the Catholic League North Section team after garnering second in the 440 and third in the 100. After anchoring three sprint relays to victory and one new Loyola record at the Brother Rice relays, Todd was ready to make his final Catholic League championship meet something special. In a remarkable performance, Todd won individual League titles in the 220 yard dash (23.3), and the 440 yard dash (51.8), and took a second place in the 100 meter dash (10.2). He closed an already noteworthy day with an anchor leg on the victorious mile relay team. He was named Loyola's Most Valuable both for his outstanding final meet and for his accomplished career.
Back